The Acne infantum is directed to a lower age-related form of widespread skin disease acne that infants aged three to six months and must be distinguished from the neonatal acne – a lower mold that occurs in newborns under three months. As a rule, the doctor selects external therapy in the form of mild facial cleansing to treat the skin disease , although antibiotic therapies to regulate inflammatory processes and scarring may also be indicated for more severe forms.

What is acne infantum?

Acne infantum is an age-related sub-form of the widespread skin disease acne that affects young children between three and six months of age.

Acne is the most common skin disease. Viewed over a lifetime, more than 85 percent of all people are affected, which in most cases is related to the influence of certain sex hormones . The skin disease is differentiated on the one hand according to severity and on the other hand according to the age of the patient. The name Acne Infantum is an age-related sub-form of the disease.

The doctor understands this to mean acne in prepubescent childhood. This dermatological phenomenon is also known as acne infantilis or toddler acne. This is to be distinguished from newborn acne, the so-called acne neonatorum in babies before the third month of life.

Infant acne, on the other hand, occurs in children between the ages of three and six months. Boys are more often affected by acne infantum than girls, which can be said for acne in general. Particularly severe forms of acne infantum are also called acne conglobata infantum.

The causes of acne infantum have not yet been adequately clarified. The temporary high production of androgens, i.e. male sex hormones, is the main topic of discussion. In this context, the phenomenon can also be symptomatic of a hormone-producing tumor , which must be clarified in the context of an endocrinological examination.

The so-called adrenogenital syndrome can also be accompanied by symptoms of acne infantum, an autosomal recessive inherited metabolic disease that hinders hormone synthesis in the adrenal cortex. One of the most common causes of acne infantum, but also newborn acne, is congenital hyperplasia of the adrenal glands.

This is usually temporary and usually normalizes over a period of six to nine months. Sometimes comedogenic cosmetics can also give the appearance of acne infantum. If highly fatty products are used to care for the child’s skin, dermatological changes often occur.

Like any acne disease, acne infantum is probably related to hormonal processes and manifests itself in papules and pustules on the skin of the face and especially the skin of the cheeks, with severe forms of the disease also deep-seated fistulas and inflammatory nodules that later leave scars on the skin.

Acne infantum is a dermatological disease of the facial skin. As a rule, most of the skin changes appear, especially on the cheekbones. These skin changes can take various forms, depending on the severity of the disease.

They usually express themselves as densely packed comedones or in the form of numerous papules and pustules. Apart from this, inflammatory nodules sometimes occur in acne infantum, which are particularly deep and usually melt down. The latter symptoms in particular leave permanent scars later, which can be minimized with suitable therapy.

The doctor usually makes the diagnosis of toddler acne using visual diagnostics. The medical history helps him rule out causes such as the use of comedogenic cosmetics. Since he also has to exclude tumors and symptoms such as adrenogenital symptoms from a differential diagnosis, he usually also orders extensive examinations from the specialist field of endocrinology.

Acne infantum usually heals completely within a few months with suitable therapeutic measures and does not leave any serious scars . In severe forms, however, healing can take several years, whereby deep-lying nodules and fistulas in particular can leave facial scars.

Infant acne is a phenomenon that primarily affects children between three and six months of age. To make the cause of this skin disease clarify and to find an appropriate treatment, the affected child should the skin – or pediatrician are presented. If necessary, he or she will refer the child’s mother to an endocrinologist or dermatologist.

The point here is to minimize the consequences of symptoms that are presumably hormone-related. Acne infantum can lead to severe inflammation on the facial skin of young children. These don’t just hurt. They can also be scratched up by the child and lead to fistulas or boils of the skin of the face. If left untreated, deep scar craters can occur. It would be stressful for the child in every way not to see a doctor immediately.

If the acne infantum is mild, it may be sufficient to observe the skin. However, since it may be about the consequences of another condition, seeing the doctor is a better choice given the patient’s young age. The treating specialist should decide whether treatment of the affected areas of skin or antibiotic therapy is appropriate. The mother should not dare to treat toddler acne herself. It could be that the acne infantum is a symptom of another disease.

When making a prognosis of infant acne or Acne Infantum, the course of the disease is significantly involved. However, each of these cases, whether mild or severe, belongs in the care of a doctor. In mild cases, the small red pimples with a yellow lump in the middle heal completely.

The chances of a trouble-free recovery increase as soon as a clean cloth is placed under the baby’s cheek while sleeping to catch the saliva before it touches the skin. In addition, pimples and pustules must never be squeezed out. The chances of developing acne vulgaris during puberty are very high.

Common acne is caused by hormonal changes during puberty and can be easily treated with the help of a doctor. Untreated, however, pimples and pustules accompany the young patient until the end of his twenties, in rare cases even up to 40 years. What remains are large, scarred areas and an often battered self-esteem. In this case, psychological therapy would also be indicated in addition to the medically necessary.

The conventional therapeutic measure for acne infantum corresponds to an external therapy that mainly involves regular and mild skin cleansing. Greasy products must be avoided. Instead, a low concentration of benzoyl peroxide such as acner oxide is applied to the affected areas of the skin. As an alternative, cream products with azelaic acid are available, for example Skinoren cream.

Since small children have a significantly thinner skin and thus a higher absorption rate than adults or adolescents, the doctor must plan the concentrations and duration of use of the products as carefully as possible in advance.

For more severe forms of Acne Infantum, systemic antibiotic therapy is used, which is primarily intended to counteract the inflammatory processes and thus prevent scarring. In this context, erythromycin is often used, which is usually given twice a day.

In most cases, Acne Infantum refers to another underlying disease, which is why the treatment of this disease is usually causal. The affected person suffers from pustules and papules, which can also be associated with pain . The symptoms can, however, be remedied and limited with the right treatment, so that there are no particular complications for the patient.

Likewise, in serious cases, scars and wounds can develop, which persist into adulthood. Treatment usually takes place through the ingestion of healthy food. Furthermore, the complaints can be reduced and treated with various care products.

If Acne Infantum occurs due to a certain food or a certain ingredient, the parents must consider this in the diet in order to prevent the symptoms and discomfort. The hormone status of the patient can also be checked in order to avoid the same symptoms in adulthood. The life expectancy of the person affected is not restricted by the disease and there are usually no further complications.

Acne is difficult to prevent. However, good skin hygiene can minimize the risk of the disease or at least reduce the severity of the disease. In particular, pH-neutral, water-based skin care products can be used in this regard.

In addition, a highly glycemic diet should be avoided, as this type of diet is particularly often associated with the appearance. Under certain circumstances, it can make sense to have a child’s hormone status determined at an early stage. Homeopathic measures may be available to regulate the hormone status.

In children, parents should ensure that the creams are applied regularly to speed healing. Likewise, other creams or make-up should not be used. Above all, oily skin products should be avoided. The face should be spared and only cleaned with a light lotion. In the case of wounds from Acne Infantum, they can be treated with plastic surgery.

Complete treatment and removal of the wounds is not always possible. It is not uncommon for Acne Infantum, especially in children and adolescents, to cause depression or other upsets. Discussions with family and friends are useful here. Contact with other sufferers of the disease can also be helpful in order to exchange information. The life expectancy of the patient is not negatively affected by the disease.

Parents can support the healing process of their child with a diagnosed acne infantum in many ways. In their daily skin care routine, parents should pay attention to the use of mild and non-greasy products. Numerous test seals can facilitate the decision when buying care products. Attention should be paid to the term “skin tolerance confirmed by dermatologists”. Even if skin care products are offered for atopic dermatitis, these products are recommended.

The choice of a natural cosmetic product (ingredients from organic farming) can also be an option. Depending on the severity of the disease, the doctor can also prescribe medically effective ointments. Parents should pay attention to a gentle dosage, as the child’s skin absorbs the active ingredients much more strongly.

If antibiotic therapy is necessary, the child’s organism can be supported by accompanying treatment with healthy intestinal bacteria. These are available in the form of drops or powder in the pharmacy . Furthermore, parents should pay attention to comprehensive protection from the sun and the cold. All factors that cause stress to the skin must be minimized. Dry room air can be counteracted by using a humidifier or wet cloths over the radiator.

If a food intolerance is suspected to be the cause of the skin irritation, parents must take this into account when feeding their child. If there is an imbalance in the hormonal balance of the disease, homeopathic remedies (Hepar sulfuris, Silicea) can be used to support the disease. 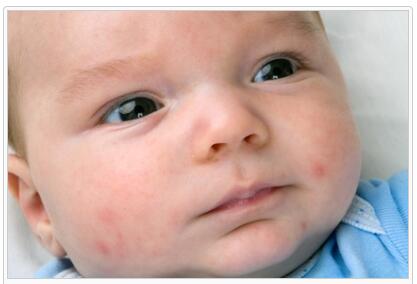