The physician describes impairments in the somatic and cognitive development of the child under alcohol embryopathy (AE), which is sometimes also referred to as fetal alcohol syndrome . Alcohol embryopathy is triggered by alcohol consumption or alcohol abuse during pregnancy.

What is alcohol embryopathy?

The doctor describes an alcohol embryopathy as impairment of the somatic and cognitive development of the child due to the consumption of alcohol during pregnancy.

Alcohol embryopathy manifests itself in some cases as short stature , belpharophimosis, facial anomalies and also microcephaly . Sometimes a sunken root of the nose, deep-seated ears, malformations of the heart , genitals, skeleton and kidneys such as blood vessels can also indicate that alcohol embryopathy is present.

Furthermore shows the affected childAbnormal behavior, so that many of those affected suffer from hyperactivity or from attention and concentration disorders. In addition to Down syndrome , alcohol embryopathy is the most common cause of mental or intellectual disabilities.

The cause of alcohol embryopathy is mainly due to alcohol consumption or alcohol abuse during pregnancy. So far, however, there is no direct correlation between the extent and the amount of alcohol consumed, so that it cannot be said at which “limit” impairments occur or the probability is increased that the child is affected by alcohol embryopathy.

The fact is that alcohol is potentially toxic and can cross the placental barrier. Due to the fact that the children only have their own functional metabolism after birth (postnatal metabolism), the child’s body cannot break down the toxins on its own . Poisoning occurs, which subsequently triggers alcohol embryopathy.

Organic malformations or characteristic developmental disorders are the most common symptoms. The doctors also suspect that alcohol consumption during pregnancy also inhibits the child’s cell division and subsequently damages the Purkinje cells. These ensure the development of balance and are also responsible for the coordination of the muscles.

Classic symptoms and signs are attention deficit disorder (ADHD for short), short stature and hyperactivity. Sometimes there is a mental or intellectual disability; in some cases, however, the doctor only finds a developmental disorder in the children. Growth disorders can also occur in the context of alcohol embryopathy.

Many children also suffer from cheilognathopalatoschisis (so-called cleft lip and palate) and a significant underdevelopment of their muscles. Other symptoms can include poor concentration, aggressiveness and alcohol-related heart muscle damage.

The course and prognosis of alcohol embryopathy vary and depend primarily on the specific impairments present. Around a fifth of all affected children can lead a “normal” life or attend a “normal” school. However, 30 percent of all those affected are severely disabled.

The doctor determines the alcohol embryopathy or the fetal alcohol syndrome on the basis of the characteristic symptoms and signs. Sometimes the doctor can also prove the mother’s alcohol abuse; Evidence is provided in the context of a blood analysis (ferritin, liver enzymes) or an anamnesis. The physician can also order a magnetic resonance tomography and also a sonography .

These imaging procedures ensure that any impairment of the cerebral structures and dysplasias can be detected. This also includes any impairment of the cerebellum and damage to the kidneys, which also suggest alcohol embryopathy. Using a cardiological diagnostic procedure (cardiac catheter and EKG ), the attending physician can also make a statement as to whether the heart is also affected by a malformation or not.

Various development tests or neuropsychological test methods ensure that the doctor receives information on whether there are disorders in motor, language, social and cognitive abilities. Sometimes the doctor has to make a differential diagnosis; in this case, Edwards syndrome (also known as trisomy 18) and Dubowitz syndrome can be ruled out.

Alcohol abuse during pregnancy can lead to alcohol embryopathy. Depending on the time of intake, this can lead to different organ damage in the embryo. Above all, alcohol consumption during the first three months of pregnancy leads to a disruption of organ formation. For example, children grow up with a congenital heart defect .

A ventricular septal defect can lead to heart failure (heart failure) at an early stage and thus to death of the child. Furthermore, there is usually a smaller skull (microcephaly) and a smaller brain (microencephaly). Consumption of alcohol during the second trimester of pregnancy (4th to 6th month) carries the highest risk of abortion.

There is also a delay in growth development here. In the last three months of pregnancy, the fetus develops both physically and mentally. This can be disturbed by the influence of alcohol. The infant could experience physical and mental disorders.

Unfortunately, in many cases, alcohol embryopathy cannot be treated directly, as various malformations and deformities of the child occur even before the birth. However, in the case of alcohol embryopathy, a doctor must be consulted in any case, since the disorders of the development can be limited with the help of medical treatment. Should the parents therefore notice growth disorders or development disorders, a doctor should be consulted in any case. The symptoms and characteristics of the disorders can depend heavily on alcohol consumption during pregnancy and can differ.

It is not uncommon for malformations and damage to the organs to occur, which must also be treated by a doctor. Without treatment, there are considerable restrictions in the patient’s everyday life and, as a rule, also a reduced life expectancy.

A causal treatment of alcohol embryopathy is not possible. Occasionally, however, somatic impairments can be (partially) corrected surgically. These include facial anomalies such as a cleft lip or palate, organic malformations and underdevelopments, as well as hearing and visual disorders. Any development deficits can – provided favorable environmental and contextual conditions exist – be compensated for or compensated for or activated by existing potential.

Occasionally, the cognitive, psychomotor as well as social and linguistic undesirable developments can also be compensated. Early childhood measures are required for this. Those are made up of occupational therapy , physiotherapy as well as speech and dysphagia therapy . In many cases, music therapies as well as hippotherapy and motopedics are used, so that sensory integration is given.

However, it is important that there is no “excessive therapy” that could overwhelm the child. It is important that integration aids (such as when starting school) are used. However, if there is pronounced hyperactivity or if the child suffers from ADHD, medication can subsequently also be prescribed.

Mainly psychotropic drugs (such as methylphenidate – Medikinet, Ritalin) are administered. In two thirds of all cases, the affected child grows up in a home or with a foster family. First of all, it is important that those caregivers are familiar with alcohol embryopathy and receive psychological support.

Alcohol embryopathy causes considerable impairments and discomfort in the newborn. In most cases, various deformities occur on the body and internal organs . The brain can also be damaged, which can lead to motor and mental complaints in the patient.

In most cases, the children suffer from ADHD and disorders of growth and development. Aggressiveness and easy irritability are also common. Those affected cannot concentrate properly due to alcohol embryopathy and they also suffer from heart problems.

The exact effects of alcohol embryopathy on the child depend heavily on the duration and amount of alcohol consumption, so that a general prediction is usually not possible. Often the children are severely disabled, so that they depend on the help of other people in their lives. The quality of life of the patient is significantly reduced by alcohol embryopathy.

If possible, alcohol embryopathy must be treated during pregnancy . However, even after birth, the children also need various therapies and in many cases also operations in order to survive.

In most cases, those affected by alcohol embryopathy have no special follow-up options available. Therefore, they rely on medical treatment to counteract the harm caused by alcohol consumption. However, a complete cure cannot be achieved.

The life expectancy of the child may be restricted by the alcohol embryopathy. As a rule, early diagnosis and timely treatment have a very positive effect on the further course of the disease. Above all, the child must be encouraged and intensively cared for in order to treat the damage. Since the affected children often show hyperactivity, drugs should be taken.

Parents must ensure that they are taken regularly and that they may interact with other drugs. Furthermore, psychological treatment of alcohol embryopathy is often necessary, although discussions with family or friends can also be useful. Physiotherapy exercises can also be performed in your own home and can accelerate the healing process for those affected. The extent to which the symptoms of alcohol embryopathy can be alleviated cannot be universally predicted.

Parents who suspect alcohol embryopathy in their child should talk to their family doctor . If the damage is diagnosed at an early stage, a significant improvement in the state of health is possible. A prerequisite for this, however, is a willingness to cooperate on the part of the parents.

In addition to the actual therapy, the mental and physical limitations can at least be compensated for by additional support and measures such as physiotherapy . In addition, the parent’s causal alcoholism must be treated. Withdrawal and participation in self-help groups can, on the one hand, learn how to use alcohol responsibly . On the other hand, therapeutic measures help to take responsibility for alcohol embryopathy and to accept the damage that has already occurred.

If the parents show no willingness to cooperate, the affected children have to learn to deal with the disease themselves. This is also possible through therapeutic measures , but also through a change of environment and renunciation of the parental home. In addition, a healthy and active lifestyle can often improve the quality of life. Since the manifestations of an alcohol embryopathy differ from case to case, the specific measures should be worked out with a doctor or therapist . 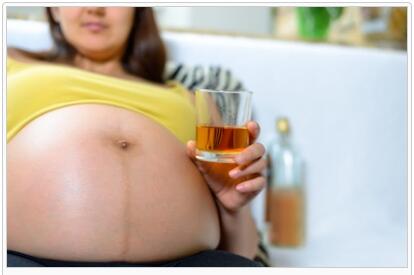