According to DigoPaul, an alkaloid is an organic nitrogen-type compound that is produced by certain plants. These compounds generate physiological effects of different kinds, which form the basis of drugs such as cocaine and morphine.

The alkaloids are secondary metabolites of vegetables that are synthesized by amino acids. An alkaloid, therefore, is a chemical compound that has nitrogen that comes from the metabolic process of an amino acid. When its origin is different, it is spoken of pseudoalkaloids.

By causing effects on the central nervous system, alkaloids can poison humans. Therefore, since they are present in vegetables, it is possible that poisonings occur accidentally, when a person ingests a food whose properties are unknown.

It is essential to understand that most alkaloids have their origin in the plant kingdom; so much so, that about 10% of all plant species have alkaloids. In some cases, these compounds appear in all parts of the plant, as occurs with yew (its scientific name is Taxus bacata), a tree highly appreciated by birds, from which it is only possible to use its aril as food, the only non-poisonous part.

In other plants, alkaloids are usually only in some of the following parts, or abundant in proportion to the rest:

* the leaves: tea (Camellia sinensis) and tobacco (Nicotiana tabacum) are just two examples of the many vegetables in which alkaloids are found in a greater proportion in the leaves than in the rest of the body;

* the seeds: in this case, some of the plants that have alkaloids in the seeds are caffeine (Coffea arabica) and strychnine from the vomica nut, a species of large tree that was known in Europe in the 1500s and began being used as a poison;

* the roots: in the aconite (Aconitum napellus), in the atropine that usually appears in belladonna (Atropa Belladona) and in the pitolacine that occurs in carmine grass (Phytolacca americana) we can see three cases of plants that have alkaloids in the roots;

* the fruits: finally, the fruits of the mentioned belladonna, the berries, and the hemlock (Conium maculatum) have a good concentration of alkaloids.

Before focusing on the possible effects of alkaloids on our body, it is necessary to understand that plants apply them to different functions, which we can broadly divide into three groups: defensive (they use these compounds to protect themselves from animal attacks); hormonal (similar to what happens in animals with adrenaline, for example); allelopathic (to influence other plants positively or negatively, as appropriate).

The alkaloids are psychoactive: therefore they contribute to reducing pain and treating mental disorders. Beyond medicinal use, alkaloids are also used for non-therapeutic purposes, putting health at risk.

An alkaloid can cause a dependency in the person, which even undergoes physical and psychological changes when not consuming it (the so-called withdrawal syndrome). In some cases, as with cocaine, the addiction it generates is very strong and the health effects are very harmful due to consumption. In other products, the effects are less, as with caffeine.

It is important to keep in mind that alkaloids are not harmful or beneficial in themselves, but depend on the use they are given. The morphine, for example, is very important to inhibit pain after surgery or when a patient suffering from cancer, but can also cause kidney failure or pancreatitis when abused. 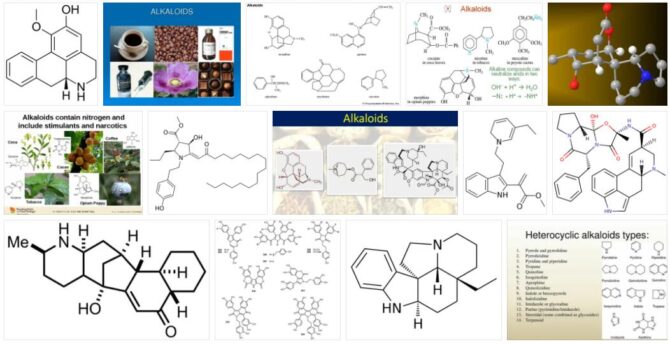