According to DigoPaul, alkalosis is a medical concept used to name excess alkalinity in the bloodstream. Alkalinity, on the other hand, refers to the alkaline: which has the metallic hydroxyl called alkali.

Returning to the notion of alkalosis, it is a picture that arises from the increase in alkalinity of the blood, which happens to present an excessive level of alkali (a base). The opposite is acidosis, a condition derived from increased acid.

Alkalosis, thus, reveals a disorder of the hydroelectrolytic type. Since the kidneys and lungs are in charge of regulating the level of bases and acids in the body, these disorders are linked to a rise in the amount of bicarbonate or to a drop in carbon dioxide.

When there is an elevated level of bicarbonate in the blood, it is called metabolic alkalosis. In this case, it is possible to differentiate between hypokalemic alkalosis (the kidney reacts to the loss of potassium by a diuretic or another cause), hypochloremic alkalosis (reaction of the kidney against the drop in the level of chloride, which may be due to vomiting) and compensated alkalosis (the body manages to balance bases and acids, despite the fact that carbon dioxide and bicarbonate are still in abnormal amounts).

The respiratory alkalosis, moreover, arises when an individual is in a place with low oxygen (for example, at very high altitude). This reduction of oxygen in the blood encourages respiration and leads to excessive loss of carbon dioxide. To compensate for alkalosis, the kidney drives increased bicarbonate excretion.

Regarding the symptoms of alkalosis, the list is relatively extensive and includes the following:

* confusion, which can lead to coma or stupor, a term that in medicine is defined as a decrease in intellectual functions that takes place together with an apparent attitude of indifference or amazement;

* tremors in the hands;

* loss of balance and dizziness;

* muscle fasciculations, that is, slight contractions of the muscles that occur involuntarily and that do not generate the movements of the limbs but can be seen under the skin;

* prolonged muscle cramps, also known as muscle spasms. It is the result of involuntary muscle tension without the corresponding relaxation following it;

* tingling or numbness of any limb, such as the feet or hands, or the face.

With regard to the characteristics of a medical consultation focused on alkalosis, it is normal for the doctor to perform a physical examination of the patient and ask questions related to the symptoms that he has noticed. You can then ask for the following two laboratory tests:

* an arterial blood gas, a measurement of the level of oxygen and carbon dioxide in the blood, which also serves to know its degree of acidity;

* basic metabolic tests, among which the electrolyte test stands out, in order to confirm the presence of alkalosis and determine if it is metabolic or respiratory.

Treatment for alkalosis cannot be defined until the doctor has found the cause. If we take the case of alkalosis caused by hyperventilation, for example, it is common to recommend placing a paper bag in front of the mouth to breathe inside it and thus ensure that so much carbon dioxide is not lost from the body. The administration of certain medications is also possible to solve the loss of potassium and chloride, among other chemicals. In general, patients with alkalosis manage to overcome it with the indicated treatment. 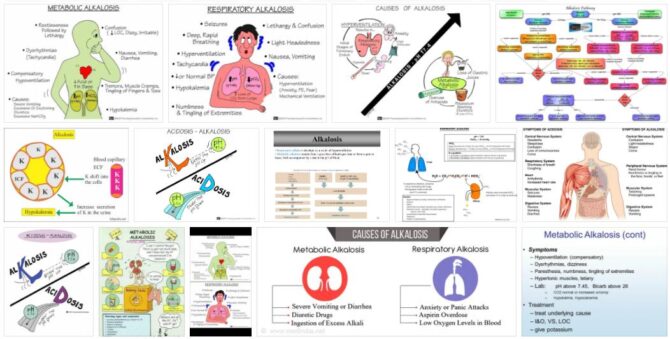