Before proceeding to know the meaning of the term deciduous, it is necessary to choose to discover its etymological origin. In this case, we can establish that it is a word that derives from Latin because it is the result of the sum of two words of that language:
-The term “caducus”, which can be translated as “falling”.
-The noun “folium”, which is synonymous with “leaf”.

As these concepts suggest, the term deciduous is used as an adjective to refer to plants, shrubs or trees whose leaves expire.

This means that, at a certain time of year, deciduous species lose their leaves, as they dry out and shed. Therefore, there is a period when deciduous trees lack foliage.

It is important to mention that certain deciduous trees, after losing their leaves, flourish. This action contributes to pollination since the flowers are easily detected by insects in the absence of foliage. In addition, the wind is responsible for dispersing the pollen more effectively. This flowering of the deciduous plants, however, requires a greater effort from the plant and is not always successful because the low temperatures can damage the new flowers.

An example of a deciduous tree is the walnut, whose scientific name is Juglans regia. This species, which can reach a height of twenty-five meters, has alternate leaves about a foot long that, at a certain time of the year, fall to the ground. It should be noted that walnut is exploited by man thanks to the quality of its wood and the walnut, an edible fruit that has a high amount of protein, omega 3 fatty acids and vitamins B and C.

Among the most significant deciduous trees, in addition to those already exposed, are the chestnut, which can reach up to 30 meters in height; ginkgo biloba, which is also known as the fan tree and its leaves are shaped like those; and the lagerstroemia indica, which is about 8 meters tall and stands out for the beauty of its flowers.

In the same way, we cannot ignore the existence of what is known as temperate deciduous forest. This can be found in corners such as Japan, Canada, Russia or Chile and, as its name suggests, it has the peculiarity of being made up of deciduous trees. Precisely for this reason, in this type of forest it is common for trees such as elms, oaks, beech and maples to take center stage.

The animal species that live in the temperate deciduous forest must be able to adapt to the changes that it experiences. And among those are from raptors to rodents through hedgehogs, squirrels or woodpeckers, for example. 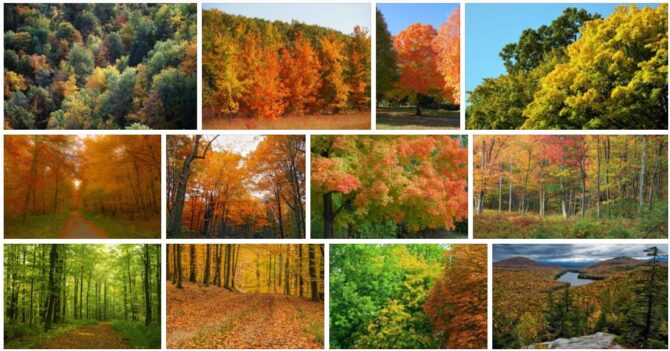