According to abbreviationfinder, the concept of food chain is used to name the interrelation established by living beings that feed on each other in a certain order. The chain idea refers to the fact that one organism eats another and, in turn, is eaten by a third party.

Also called the food chain, the food chain reveals the food links between decomposers, consumers and producers. It is a current of energy that begins with photosynthesis: that energy, through nutrition, is then transferred from one organism to another.

The members of the food chain must be part of a set of organisms called the biological, biotic, ecological community, or simply biocenosis. These are the species that share the same biotope (an area whose environmental properties give rise to the life of a certain flora and fauna).

The biological community is divided into three well-defined groups: that of plants, that of animals, and that of microorganisms, which are known by the names phytocenosis, zoocenosis, and microbiocenosis, respectively. If we base ourselves on a definition of ecosystem provided by botanist Arthur Tansley in 1935, we can say that it is made up of both a biocenosis and its corresponding biotope.

It can be said, therefore, that the food chain begins with photosynthetic plants that create organic matter from inorganic using the energy of the sun’s rays. These living beings act as producers. The chain continues with consumers: organisms that feed on organic matter that comes from other species. Finally we have the decomposers, who feed on waste and debris.

Take the case of a rodent that feeds on plants. In this way it obtains the energy it needs to survive. This rodent can, in turn, become food for a fox. Then the fox, when dying, is eaten by a scavenger bird. As can be seen, all these animals (rodent, fox and scavenger) are links in the food chain and each one constitutes a different trophic level.

It is important to point out that throughout the passage through the food chain a great loss of energy is generated, as it is transferred from one link to the next. In other words, a high-level consumer receives significantly less energy than a low-level consumer. In this context we speak of primary consumer, secondary consumer, etcetera. Because of this phenomenon, it is believed that it is not possible to extend a food chain beyond quaternary consumers; in fact, it generally only reaches the tertiary level.

If, for any reason, one of the links in the food chain disappears, it can generate a fatal imbalance for the entire biological community. Returning to the previous example, if the human being deforests the region and the rodent no longer has plants to eat, it can become extinct. Thus the fox runs out of food, also affecting the scavenger bird.

The human being not only interferes in a negative way through the way in which he relates to plants and the soil, but his role within the food chain has been distorted to such an extent that he does not seem to be part of this planet.

Unlike all other species on Earth, ours does not use its own tools to get food: it does not tear leaves from trees with its own mouth or tear its prey with its bare hands, but leans on a abusive system of breeding and slaughter of animals, as well as in massive and artificial plantations that package the food and distribute it in commercial stores. This, which makes us feel superior to others, should make us ashamed for having lost our identity. 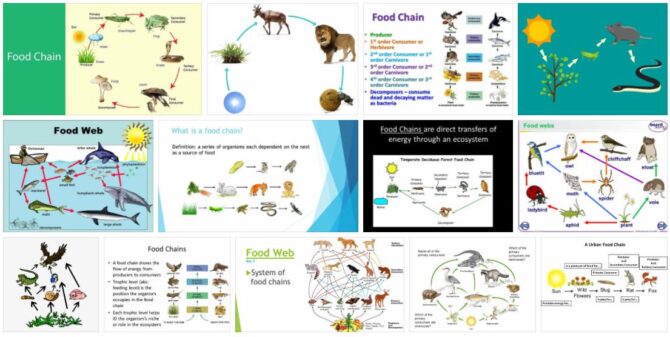